Humans invented plastic and animals are harmed by it. They eat it, they get caught in it, or get sick because of it. Plastic pollution occured so rapidly that animals

were unable to adjust their behaviour around this new material. 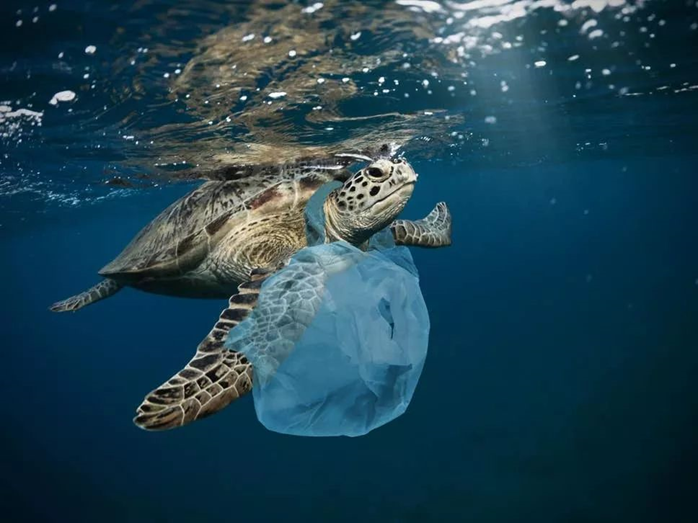 Getting stuck in plastic can have horrible consequences for the animals such as reduced mobility, starvation, drowning or suffocation. It can lead to infections, growths or amputation of limbs. Animals stuck in plastic become less capable of finding food and become also easy victims for predators. For whales, entanglement in plastic is a greater threat than whaling. The sharp threads of nets can cut into their flesh, causing whales to lose fins or tails. Other whales must swim with the fishing nets in which they are entangled. Marine mammals such as sea lions, dolphins, and seals are regularly the victims of their own curiosity, and turtles are known for getting easily stuck in plastic too. They swim right up to plastic objects and play with them. These species have not yet learned that these objects are not fun but dangerous.

Birds can become entangled in the plastic derived from balloons which can wrap around their legs or head. It is indeed a festive sight to release balloons, especially large masses of balloons. But it is horrible to see birds wearing balloon ribbons around their neck. After their flight, balloons do come down somewhere. If that is at the sea, there is a chance that they wash up on land, and animals get stuck in the plastic ribbons. A lot of balloon remnants are always found on beaches. The Plastic Soup Foundation and other environmental organizations have been running the campaign Die ballon gaat niet op (The Balloons don’t go up) for years, aiming to discourage and prohibit the release of balloons.  In the Netherlands, more and more municipalities prohibit the release of balloons. Also, the organization which oversees the annual King’s Day celebrations, the Koninklijke Bond van Oranjeverenigingen, now also discourages the practice. 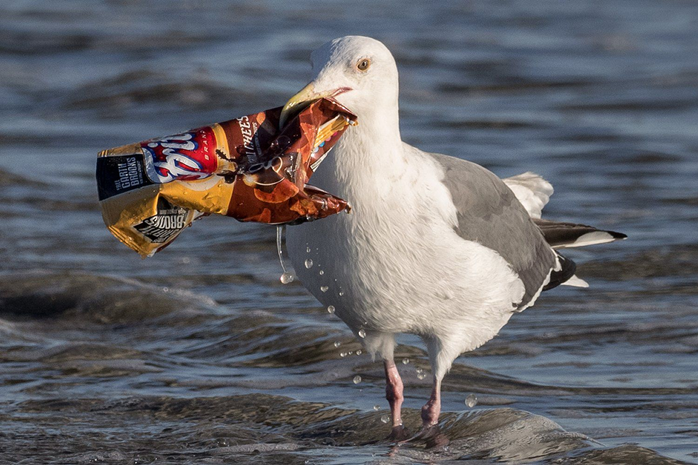 Animals often eat plastic because they are not always able to distinguish plastic from food. Organisms that are filter feeders (plankton, shellfish, baleen whales) or that live under the beach sand (lugworms) cannot make that distinction. Some fish eat plastic because they mistake it for fish eggs and bite at floating plastic in the water. Turtles see plastic bags as the jellyfish that are usually on their menu. In the stomachs of the northern fulmar – which gathers its food by flying with an open beak above the water surface – plastic is almost always found. Many grazing animals on land also eat plastic. Plastic debris coated with food waste increases the chance that the plastic will be eaten.

Animals that accidentally eat plastic suffer and often die as a result of it. Swallowed plastic fills the stomach and not surprisingly this reduces the feeling of hunger. Animals eat less, obtain less energy, and weaken. Larger pieces of plastic can also block their gastrointestinal tract so that the plastic can no longer be excreted. In other cases, plastic is ground into small pieces in the stomach and then scattered everywhere. In this way, the northern fulmar grinds and spreads millions of pieces every year. Some of it is left at abandoned nesting sites.

Fish eat plastic. Turtles eat plastic bags. Even whales have been found dead with tons of plastic in the stomach. The stomach contents of the northern fulmar, according to long-term Dutch research, consist of an average of twenty-five pieces of plastic. A sperm whale that washed up at the Wakatobi National Park in Indonesia in December 2018 had 115 cups, 25 bags, four bottles and two slippers in its stomach. More than a thousand pieces of plastic were counted in the whale’s stomach and the total weight of plastic was six kilos. In the United Arab Emirates, plastic causes half of all camel deaths. The animals eat garbage and lumps of plastic of between ten and sixty kilos have been found in their stomachs. Because the plastic cannot pass out of the stomach, the lump continues to grow until the animal dies of starvation. In July 2010, a young green turtle washed ashore, heavily weakened, on the coast of Brazil near Florianópolis and died a few hours later. This specimen had 3267 pieces of plastic in its gut and another 308 pieces in its stomach. Only pieces of plastic larger than 5 mm were counted.

The plastic problem is so huge that it can easily make you feel discouraged. It almost seems too big to do anything about. But don’t forget that people are resourceful. You too can do much more than you think to help the oceans, the planet, and yourself!  So, take action and make a difference!